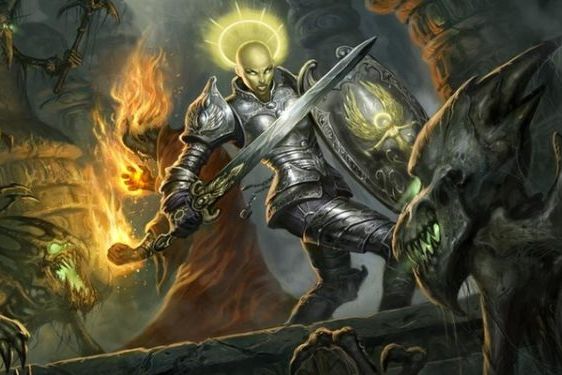 Aasimar bore the mark of their celestial touch through many different physical features that often varied from individual to individual. Most commonly, aasimar were very similar to aasimar 5e humans, like tieflings and other planetouched. Nearly all aasimar were uncommonly beautiful and still, and they were often significantly taller than humans as well.

While several aasimar were immediately identifiable as such, others were even less distinguishable than tieflings from their human ancestors, commonly standing out with only one unusual feature. Most aasimar had pupil-less pale white, gray, or golden eyes and silver hair, but those descended from planetars could also have emerald skin, while those descended from avoral celestials might have feathers mixed in with their hair. Those descended from ghaeles often had pearly opalescent eyes. Solar-descended aasimars often had brilliant topaz eyes instead or silvery or golden skin and those with couatl or lillend lineage most commonly had small, iridescent scales. Many aasimar also had a light covering of feathers on their shoulders, where an angel's wings might sprout. As in tieflings, aasimar bloodlines could sometimes run dormant for generations, reemerging after being hidden for some time.

Most aasimar grew up cautious around others and, like tieflings, were sometimes misunderstood, though never to the hateful extent many of the fiendish bloodlines were. Even those raised by understanding parents could not escape their strangeness, or the curiosity (or even fear) that their unique nature sometimes provoked. Many aasimar even suffered prejudice, something that deeply hurt the soul of the aasimar in question since most had an inherent bent towards empathy for others.

Though many aasimar were good in nature, thanks in a large part to their celestial ancestors, not all were, just as not all tieflings or fey'ri were evil. Some aasimar fell into the trap of evil, corrupted perhaps by experience or the counsel and aid of an evil god. Shar and Sseth in particular took pleasure in corrupting aasimar and turning them from the ways of their celestial forebears, nursing grudges fueled by the prejudice of others. Most aasimar avoided this path, however, and a few even received direct counsel from their celestial ancestor or a creature in its service. These individuals were the aasimar most likely to manifest the stereotypical virtues of a celestial.

As a general rule, aasimar were a wise and charismatic race, possessed of strong insights and a powerful allure with which most races could not compare. Aasimar were also quite perceptive, noticing things that others did not, and many could see largely unimpeded in perfect darkness, while also possessing the ability to cast magical light to aid those who could not see. Aasimar were also, like many of their celestial forebears, resistant to the effects of acidic elements, extreme cold, or electrical charges.